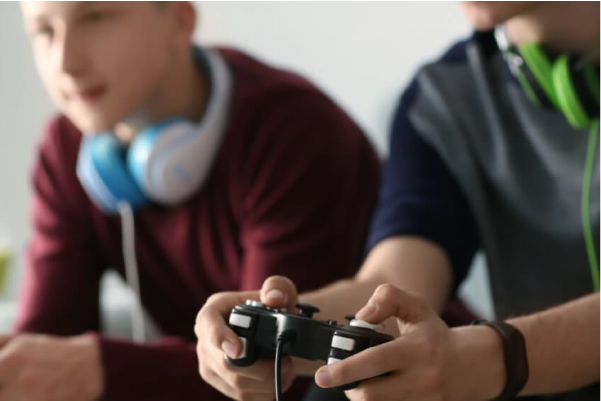 (This blog, part of a series, originally appeared in Psychology Today. Andrew also facilitates Level Up: A Group for Gamers, a support group for teen gamers who want to meet with other teen gamers and discuss the impact of gaming on their lives.)

I imagine most parents of gamers have hollered to their children to stop playing games and go be with people. Their children seem totally isolated, sitting all alone, staring blankly at a screen for hours at a time.

Children need to talk to each other, to have conversations, to get out into the world. That’s how to make friends, parents assert. They fondly recall long conversations on the phone, learning to work together by competing in sports, or playing Monopoly together at a sleepover.

To well-meaning parents, video games often look like a waste of time; a waste of a childhood. The games they grew up with didn’t have controllers, keyboards, screens, or a headset.

In this case, the headset is the key.  Although the players are physically isolated, they’re spending time with friends in the same way that people do when they talk to one another on the phone. 77% of boys play online video games with friends at least once a month.

I often hear parents say that video games don’t count as healthy communication; their kids aren’t talking about anything real when they play, they’re just talking about the game or yelling at one another.

What do gamers talk about?

Two researchers studied this exactly in 2006. They looked at over 5,800 messages sent while playing an online multiplayer game and examined whether these messages were socio-emotional or task-oriented. Socio-emotional messages are ones which helped players connect with one another, such as “Thanks for the help,” “Yeah, I agree with you,” and “Wow, that was funny.” Task-oriented messages are focused on the game itself, such as “How do you open this door?” or “Just practice some more.”

They found that there were more than 3.2 times as many socio-emotional messages as task-oriented ones. Additionally, these emotion-based messages were over 2.6 times more likely to be positive than negative.

That means that, contrary to parents’ fears, the vast majority of the messages people sent while playing this game were used to interact with others in a positive way.

For young people, it can be annoying to hear their parents encourage them to talk with others, when, from their perspective, they already are. Although the method of communication is different (i.e., communicated in-game rather than via text, phone, or in-person), the messages sent and connections built are the same.

Even if players were to only spend time talking about the game itself, games would still be a great way to bond with other people.  Lots of families have weekly “game nights” in which they play board games to spend time with one another. I spent a few hours playing card games with my family last week and, even though most of the conversation was centered on the games themselves, it was undeniably a bonding experience.

Many teens go to each other’s houses to play video games in the same room. This serves the same purpose as playing Monopoly together did for their parents. Shared experiences like these are so good at helping people connect that some therapists even use tabletop games like Dungeons and Dragons as group therapy.

There is also evidence to suggest that video games can be a safe place to experiment with social interactions for vulnerable people. These include:

Video games and other online spaces are “safe” for these individuals because they allow people to communicate when they want to, with little or no pressure to respond immediately and without requiring them to be in the same physical space with others.

Successful conversations require a wide variety of skills that many take for granted, such as reading body language, understanding tone of voice, maintaining eye contact, and rapidly comprehending and responding to information. Online video games can allow players to talk to others and make friends at their current ability level even when they are not emotionally or physically able to leave their homes. This can help build the skills and confidence necessary to try it in-person.

In fact, research has shown that many people who meet while playing games online do end up spending time with those people. This is cause for celebration for parents of young people who are otherwise socially isolated.

However, the trend of meeting new friends in-person does have the potential to become dangerous for young people, as there are reports of adult sexual predators using games as a way to meet children and teens. These incidents have greatly decreased in recent years, and it appears that children are relatively safe online. Even though reporting features and chat filters have made online spaces safer than ever, it is still a good idea for parents to keep an eye on whom their children are talking to and to have open conversations with their children about what is and is not appropriate in these contexts.

Children and teens are spending more and more time playing video games online with their friends. For most, this is a positive experience, allowing them to communicate with others even when they are unable to physically be with them. This is particularly true for people with difficulty spending time with others in-person, like those with major depressive disorder, autism spectrum disorder and social anxiety disorder.

This unconventional method of communication is helpful in fostering connections while building the skills and confidence necessary to interact face-to-face. Although steps should be taken to ensure children’s safety online, online video games are a large part of the lives of young people and should be recognized as a source of social support.