Top Five Places to Ski Powder Snow in The Alps 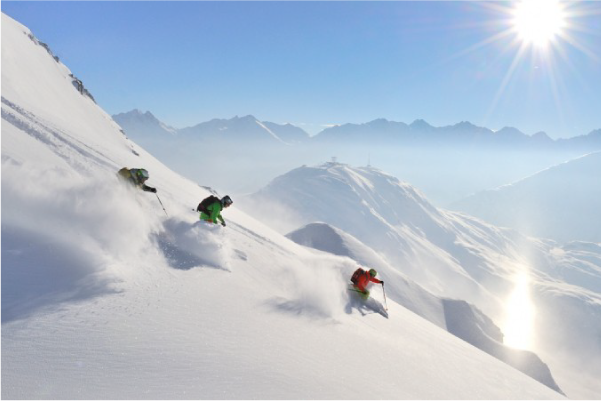 It’s not easy nailing down what the top five places are to ski powder snow in the Alps when there is so many obvious destinations on the list.

How can we leave out Chamonix, Zermatt and Andermatt? All amazing places and more than worthy of this title.

But five resorts stood out for us – mainly because we like them, but also because they all offer something very different from each other.

Let’s face it, the best place to ski powder is really anywhere there is powder – it doesn’t matter, as long as its deep, light and there’s no other tracks, it could be Dagenham for all we care.

So in no particular order here is our top five…and remember, off-piste skiing can be extremely dangerous and you must either ski with a fully qualified mountain guide or understand and be highly experienced in the nature of the mountain environment you are skiing in.

Big, brash and with a reputation for tough skiing, Val d’Isère has been attracting freeride skiers way before the word was even invented. With its link to neighbouring Tignes, it’s one of the Alps’ top off-piste destinations and has enormous amounts of terrain for expert skiers.

Lift accessed routes mean that after a snowstorm, skiers can access big powder faces such as Col Pers, which only requires a short walk to get over 1,000 meters vertical of off-piste skiing. In bad weather, the trees above the hamlet of Le Fornet provide some classic tree skiing for experienced powder skiers.

The area has always attracted skiers looking for adventure and off-piste routes that suit all ability levels. Marked itineraries mean that relative novices to off-piste skiing can experience powder snow conditions on un-groomed slopes when they are open. Vallon d’Arby is a classic example and one of the world’s great lift accessed off-piste valleys.

But there’s so much more, Mt Gele with its 360 degrees of steep off-piste playground, the famous back side of Mt Fort, Stairway to Heaven’s short, sharp walk and angelic powder bowl, Highway right next door, Cat Walk down to the dam, Hidden Valley – good luck finding that one, Rock Garden which has got nothing to do with AC/DC, Barry’s Bowl – he was a dog you know, Marlena, Croix de Coeur, Rock & Roll and of course not forgetting Bruson, the little ski area next door with lots of oomph. And that’s just the start.

This area gets more snow than anywhere else in the Alps because of its location on the northern tip of the mountain range. Last year, the connection over to Warth-Schröcken (officially the snowiest place in the Alps) boosted its powder ranking credentials even further. You’re also just a short bus ride away from St Anton, another world class resort with huge amounts of off-piste terrain.

All this makes Lech-Zürs the perfect base for a powder ski week in the Alps. There’s a great circular route for good, but not necessarily expert skiers, which starts at the top of Rüfikopf, heads across to Zürs, up to Madloch-Joch and down the back all the way to Zug. Then up to Zegerberg and back across into the town of Lech in time for some very civilised après ski at the Hotel Post. ‘One of the best ski days of the 2013-14 winter season’, said Snow.Guide Editor, Rob Stewart.

Champuloc, Gressoney and Alagna – a snowy trinity of off-piste heaven nestled in the highest corner of northern Italy’s Aosta Valley. Towering above the area is the enormous Monte Rosa mountain – consisting of several smaller peaks and making up the second largest mountain in the Alps after Mt Blanc. The ski area is huge, with three large valleys all with an inter-connected lift system spreading out over ten miles from one side to the other. But unlike other large connected resorts, there’s very few runs with around just 50 miles of them.

Here, it’s all about getting away from the runs – there’s huge off-piste potential and if you don’t know the area it’s definitely worth hiring a Mountain Guide, not only for the safety aspect but for the sheer challenge of navigating around too. If you’re into ski touring then even better.

The ‘ski resort’ of La Grave bears very little resemblance to the likes of Verbier and Lech-Zürs. In fact it bears very little resemblance to a ski resort at all. There’s a small village and one very long lift that takes you to over 3,000 metres – at the top there’s a glacier with a lift that takes you even higher. The glacier has the resorts only marked ski run, after that, as their website says, ‘each run is to imagine’.

In the right conditions, La Grave offers something very unique and special – a true wild mountain experience with a lift to carry you back. There’s not many, if any, places in the world that compare. Very few people ski here, mainly because they can’t – it’s too steep. You need a guide to get the most out of it, there’s no piste map, because there’s no pistes.

This article was originally posted on SnowGuide.