The 12 Best Art Galleries and Museums in Amsterdam 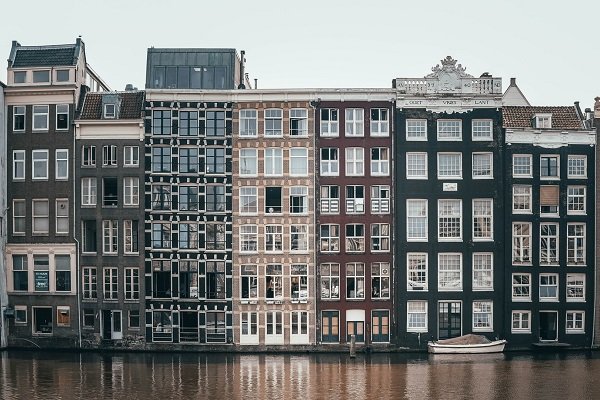 If you’re only here for a short stay but want to catch the best of Amsterdam’s art scene, head straight for Museumplein. The city’s largest square is home to four museums showcasing more Dutch Masters than you can probably handle – plus a healthy dose of modern and contemporary art.

If you’ve got more time, however, you’ll appreciate the chance to discover art across all the city’s coolest neighbourhoods, from Russian treasures to movie posters to digital deep dives into the city’s past. Many of the best Amsterdam gallery and museum buildings are as fascinating as the art they contain, whether centuries old or cutting-edge examples of contemporary design. Where else can you catch a video art installation in a 15th-century church, then hop on a ferry to a film museum that looks like it belongs in a Bond movie?

As the Netherlands marks the 350th anniversary of Rembrandt’s death in 2019, look out for events and exhibitions on his life and work taking place at Amsterdam museums throughout the year.

Designed by Pierre Cuypers and opened in 1885, the Rijksmuseum holds the country’s largest collection of art and artefacts, including 22 Rembrandts and four Vermeers. The museum’s 80 galleries showcase 800 years of Dutch art and historic objects, as well as decorative and Asian art, which has its own pavilion. But the biggest draw is the collection of Golden Age jewels such as Rembrandt’s ‘Night Watch’ – currently undergoing major restoration – and Vermeer’s ‘The Milkmaid’ and ‘Woman Reading a Letter’, alongside other masterpieces by Frans Hals and Jan Steen.

Aside from his distinctive rough brushwork and that lush, inimitable palette of yellows and blues, Vincent van Gogh may be best known for his productivity, and that’s reflected in the 200 paintings and 500 drawings that make up the permanent exhibition here. You’ll also find examples of his Japanese prints and works by the likes of Toulouse-Lautrec that lend perspective to van Gogh’s own efforts, plus temporary exhibitions that focus on van Gogh’s contemporaries and his influence on other artists. Book your tickets well in advance – demand is high.

Rembrandt bought this house in 1639 for ƒ13,000 (around €6,000) – a massive sum at the time. Indeed, the pressure of the mortgage payments eventually got to the profligate artist, who went bankrupt in 1656 and was forced to move. When he was declared bankrupt, clerks inventoried the house; it’s these records that provided the renovators with clues as to what the house looked like. You can’t help but admire the skill and effort with which craftsmen have tried to re-create it, alongside the array of beautiful antiquities, objets d’art (Rembrandt was a compulsive collector) and 17th-century furnishings that fill the rooms.

Opened in 1683 as a home for elderly women, this quaint building beside the Amstel River is a satellite of the State Hermitage Museum in St Petersburg. The museum has no permanent collection. Instead, twice a year, they host a new exhibition from the main Hermitage collection. There’s also a permanent exhibition of 17th-century Golden Age group portraits from the collections of the Amsterdam Museum and the Rijksmuseum, brought together in one impressive gallery, while the museum’s Outsider Art Museum showcases less conventional works. Tickets to each area of the museum can be purchased separately or as part of an all-in ticket.

The Stedelijk Museum, with its incredible bath-shaped extension, is Amsterdam’s go-to institution for modern and contemporary art, with an extraordinary collection that includes works by Kazimir Malevich, Piet Mondrian, Yves Klein, Roy Lichtenstein, Jeff Koons, Yayoi Kusama and Sheila Hicks. Presenting art and design objects side by side, the museum’s permanent collection is split up into sections that correspond to key social movements and themes.

A note to all historical museums around the world that struggle to present their exhibits in an engaging fashion: head here to see how it’s done. The Amsterdam Museum is both entertaining and illuminating. The first exhibit? The very buildings in which the museum’s housed: a lovely, labyrinthine collection of 16th- and 17th-century constructions built on the site of a 1414 convent. And what’s next? Visitors are whisked on a whirlwind chronological trip through Amsterdam’s past via archaeological finds (notably, there are some 700-year-old shoes), breathtaking artworks and some brilliantly edited videos. A history lesson of the most fascinating kind.

This excellent photography museum, located in a renovated canal house, holds regular exhibitions that rotate every couple of months and showcase emerging talent alongside established shutter-button maestros. They also organise talks and events for the photographically obsessed and publish their own magazine. Note that the museum does not accept cash, so pay by card or buy your ticket online in advance.

Moco stands for ‘modern contemporary’, and while this private museum is much smaller than the Stedelijk, it boasts a far more Instagrammable setting. Housed in an early 20th-century mansion, Moco’s permanent collection includes works by Andy Warhol, Jeff Koons, Damien Hirst, Keith Haring and Os Gemeos. Recent exhibitions have included works by Daniel Arsham and Icy and Sot, as well as an ‘unauthorised’ exhibition of Banksy works from private collections. (The artist himself does not support gallery exhibitions of his work.) Don’t miss the impressive array of contemporary sculpture in the Moco Garden.

Housed since 1987 in four former synagogues in the old Jewish quarter, the Jewish Historical Museum is full of religious paraphernalia, photographs and paintings detailing the rich history of Jews and Judaism in the Netherlands. The permanent displays focus on religious practice and Dutch Jewish culture – one recent exhibition set ancient texts alongside modern artworks in a fascinating look at Jewish mysticism. An excellent children’s wing crams in interactive exhibits on key aspects of Jewish culture (including a decent one on music).

This is the most important centre for film and cinematography in the Netherlands. The permanent collection includes films, movie posters and projection equipment. There are also 95,000 photos taken on the sets of films like ‘Eyes Wide Shut’ and ‘Apocalypse Now’. The striking institute building dominates the northern waterfront and is worth the free ferry ride alone.

Artists such as Karel Appel, Eugène Brands and Corneille were once regarded as little more than eccentric troublemakers. Who’d have thought they’d one day be very much part of the canon? This museum provides a stylish environment in which to trace the development of one of the most influential art movements of the 20th century. The museum also hosts temporary exhibitions of work from outside the CoBrA group (recent hits have included shows on Frida Kahlo and Sigmar Polke).

Right on Dam Square, next to the Royal Palace, the ‘New Church’ is where Dutch kings and queens have been inaugurated since 1814. The church is actually not new at all – it celebrated its first service in 1410. The name indicates the building’s relative youth compared to the 13th-century Oude Kerk (‘Old Church’) across the Damrak. Since 1979, the church has primarily been a site for exhibitions and cultural events, including Jeff Koons’ Gazing Ball in 2018, the premiere of the World Press Photo Exhibition 2019 and an exhibition on the history and culture of Suriname.

This article was originally published on Time Out.