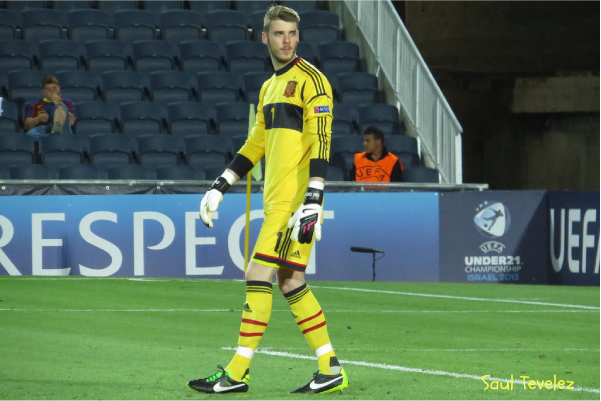 The Manchester United summer transfer window is really coming alive now! Jadon Sancho is signed, Raphael Varane seems to be moving closer to joining him and Eduaro Camavinga could be next after him. So transfer business is booming, as we look at how the roster reshape could unfold.

With that in mind, what’s gonna happen with the goalkeeping situation?

David de Gea is reportedly determined to stay and fight for his place at Old Trafford. But he’s not the odds-on favorite to be the starter this upcoming league season. That’s according to ESPN, who report that United are still “yet to receive any concrete interest in the 30-year-old, who still has two years and a 12-month option on his £375,000-a-week contract.”

United manager Ole Gunnar Solskjaer hasn’t made a decision yet on who will be his No. 1 in between the sticks, but Dean Henderson took over in the midst of the season and held the position down the stretch. In all likelihood, Henderson should and will get the first crack at being the top choice goalkeeper in 21/22.

As for De Gea, he’s still a world class shotstopper, even if there doesn’t seem to be much of a market for him this summer. It’s hard to imagine that both Henderson and De Gea will be around to time share the position long term, but who knows all this will all shape out. Elsewhere, there is currently no first team place for youngster Axel Tuanzebe at the moment, and we’ve seen and heard reports now that claim United would be willing to let the central defender move on.

Football Insider claims that Aston Villa are interested, seeing Tuanzebe as a first choice centre-back to potentially partner with Tyrone Mings. Tuanzebe has a contract that keeps him at Old Trafford until 2022 with the option to extend one additional year. Despite United’s massive woes at the centre back position, Axel only made nine starts last season.

This article was originally posted on TheSportsBank.