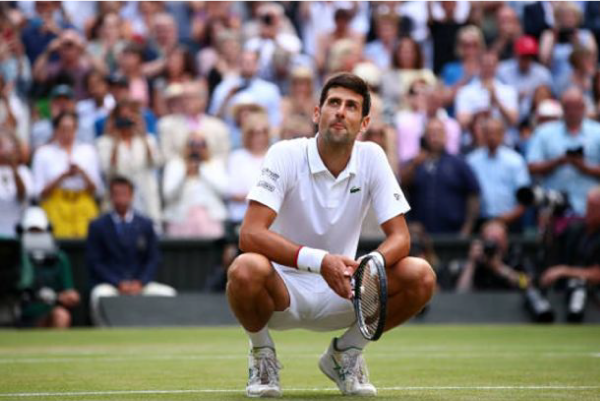 Reaching rare air during his golden years, Novak Djokovic has “a great shot” of completing the Golden Slam this year, a pair of Hall of Famers tell Tennis Now.
Reigning champion Djokovic returns to Wimbledon next week at a historic crossroads.

Steffi Graff stands as the only player—male or female— to win the single-season Golden Slam, a feat she achieved in 1988. Andre Agassi, Graf’s husband, Rafael Nadal and Serena Williams are the only other players who have attained the career Golden Slam.

In a conference call with the media today to promote ESPN’s Wimbledon coverage that begins on Monday, June 28th at 6 a.m. Eastern time on ESPN, we asked ESPN analysts Chrissie Evert and fellow former world No. 1 John McEnroe if they believe Djokovic can pull off the Golden Slam and both endorse the world No. 1 for completing what has been called a tennis mission impossible.

McEnroe says beating 13-time Roland Garros champion Nadal on Court Philippe Chatrier may well be the highest hurdle the 34-year-old Serbian faces in his quest to complete to the Golden Slam.

Since the 2018 Roland Garros, Djokovic and Nadal have combined to capture 10 of the last 11 Grand Slam championships. Given Djokovic’s dominance—Roland Garros was his record seventh major title since turning 30 years old—the fact the third-ranked Nadal has opted out of both Wimbledon and the Olympics and Djokovic’s conviction in publicly declaring the Golden Slam is an ultimate goal, McEnroe believes he has “a great shot” of pulling it off.

“His biggest obstacle to me is if his body holds up through this. It looks amazing,” McEnroe told Tennis Now. “He looked phenomenal. He’s halfway home. He won the tougher one. He’s the best player that ever lived, I would say, on hard courts. If he’s able to maintain his health through this, I mean, I think he’s got a great shot at winning the Slam…

“At this point the fact that he’s saying it shows you how much he believes he can do it. Normally you wouldn’t bring that up. It’s like saying, I’m about to pitch a no-hitter after six innings. That’s pretty gutsy in itself, shows you how confident he is.”

Creating mind-boggling Grand Slam history, Evert won at least one Grand Slam singles title every year for 13 consecutive years, a record that may well never be matched. The former world No. 1 says Djokovic’s ability to dig deeper than opponents and his resilience are among the reasons he can match Graf’s mark.

“Realistically I think he could do it, yeah. It’s not unrealistic at all,” Evert told Tennis Now. “He just showed us at the French Open why he’s different than everybody else. His reserve is just deeper than anybody else’s. The thing is, he’s not flashy, but he’s brilliant in the way he plays.

“There are so many articles written about his balance and his timing, his flexibility. But if he’s losing, he just has the ability to wait it out, wait it out. He gets one opportunity, he jumps in and he makes it happen. He makes it better than any other player.”

Evert says Djokovic’s skill recognizing and rising to the occasion in pivotal points, his 35-10 record in five-setters and  his skill meeting the moment in majors are among the reasons he has “a very good chance” to complete a Golden Grand Slam season.

“You know what he does well? He also manages himself, his schedule, his emotions, his practice. His whole life is just managed to the T. He’s in the moment every match. I think, again, I would say he’s got a very good chance.”