Embracing The Cultural Squeeze in Seville 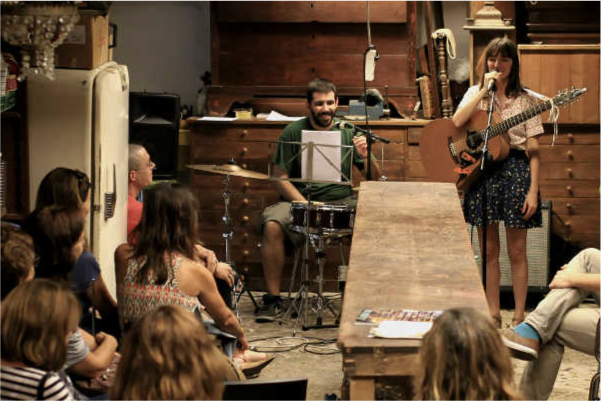 As a tourist it’s normal to look for things that take your breath away and generally the real breath robbers tend to be big, bold and an assault on one’s senses. Indeed head to historic Andalusian capital, Seville and you’ll find all the major landmarks like the Giralda Tower or River Guadalquivir lined with selfie stick-wielding, holidaymakers vying for that iconic, photo opportunity.

However, Seville is also a city of small beauties, from the narrow streets in the Jewish Quarter where you can literally reach across and touch the other side, to the tiny, brightly lit bars housing a couple of wizened, chain smoking, old men and a toilet so tiny you can’t sit down and close the door at the same time.

But in recent months the rich beauty of life in miniature has broadened out to the city’s cultural scene, where small and intimate is also getting a look-in.

Theatre was the first to embrace the ‘mini-trend’ with the opening of CasaLa Teatro, in Triana Market just over three years ago. With its 28 red, velvet seats once belonging to the much grander Lopez de Vega theatre, the tiny Teatro CasaLa claims to be the smallest theatre in Spain and is certainly one of the most unique. Housed in what were once two adjoining butchers’ stands, it has a programme packed with cultural delicacies such as live concerts, comedy, theatre and – uniquely in Seville – lunchtime flamenco. There’s no luxurious, backstage area for the artists performing at the CasaLa. Performers have to enter stage through the very same door as the punters and the resulting close proximity leads to a feeling of warm, cosy, familiarity.

Another fashion in theatre that’s been growing in force across Spain and Latin America is that of ‘Micro-Theatre’. What started as a sell-out, artistic experiment in an ex-brothel in Madrid, where several theatre companies produced stand-alone 15 minute plays to tiny audiences, has rapidly gained in popularity, so much so that this year Microteatro Sevilla opened its doors.

Microteatro Sevilla is perfect for a night when you want a bit of ‘cultcha’ but can’t face or afford sitting through two hours of brow-furrowing drama.

Just a stone’s throw from the controversial, modern architecture construction Las Setas, it’s a buzzing, modern tapas bar (i.e. expect tapas on slates not plates) that from Thursday-Sunday plays home to a full programme of short, snappy vignettes in the specially designed rooms upstairs. Microteatro Sevilla is perfect for a night when you want a bit of ‘cultcha’ but can’t face or afford sitting through two hours of brow-furrowing drama. It does help however if you have a smattering of Spanish as fifteen minutes can feel like an eternity when you’ve no idea why everyone’s splitting their sides with laughter – and in microteatro there’s nowhere to hide your confusion.

Seville has traditionally lent itself to small and intimate performances through its rich, live music scene. Grassroots flamenco was born out of those neighbourhood bars where on any average night you’d catch a slightly inebriated, teary-eyed, ensemble singing until their hearts or indeed vocal chords burst. But such spontaneous musical moments are growing few and far between these days. Bars that for many years played host to live music performances, albeit without a legal permit, now risk hefty fines and possible closure, whilst neighbours are quicker to exercise their legal right and call the police, the result being that the city is in danger of losing its musical pulse.

Step in musical events company La Matraka. They got creative about shaking up Seville’s cultural scene three years ago when they started ‘Redetejas’, a series of summer, rooftop events using private roof terraces across the city. But their latest project ‘Myplayz‘ is possibly the most innovative and exciting. Just launched this summer it bills itself as a ‘revolution in culture’ in which a web-based community of users create and attend their own cultural events from private locations (getting round those pesky licensing issues). Basically it’s an AirBnB for culture where ‘hosts turn their living rooms into a theatre, a garage into a cinema or a garden into a concert venue’. If you’re new in town, it’s a great way to make new friends and shake off that soul destroying feeling of being a faceless, nobody in the crowd. Plus you get to enjoy some exciting, cultural happenings that most of the city’s residents are oblivious to.

…it’s an AirBnB for culture where ‘hosts turn their living rooms into a theatre, a garage into a cinema or a garden into a concert venue’.

Myplayz is very much in its infancy and right now can only be found in Seville, but the idea is that eventually wherever you are in the world, you will be able to access secret, unique, cultural events where there is no money-making middleman. You just need to register online, express an interest in an event and then, based on your profile, the host will decide if you’ve made it to the list of the lucky few who can attend.

So there you have it, who said bigger was better? If you want to be on trend in Andalucia’s capital, forget mixing with the hoi polloi and go small and intimate.

This post was originally published on Urban Travel Blog.