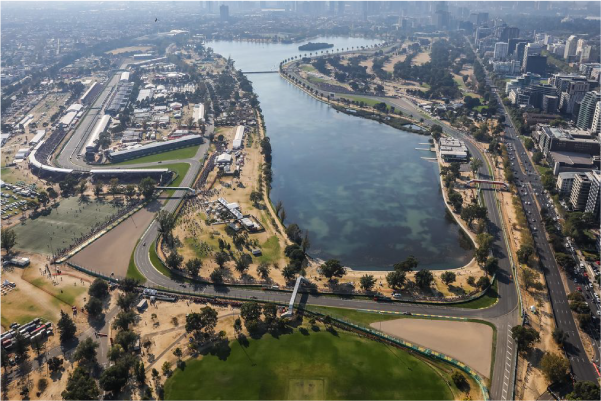 The Australian Grand Prix set to be held at the Albert Park Grand Prix Circuit from 18-21 November is canceled.

On Tuesday, the Australian Grand Prix Corporation (AGPC), the Victorian Government, and Formula 1 issued a statement announcing the event cancellation for a second consecutive year.

The statement points to restrictions and logistical challenges relating to the ongoing COVID-19 global pandemic as the reason for the event not to go ahead.

“We appreciate the challenge Australia faces with current international travel restrictions and the importance of vaccinations.”

Little further added: “I would like to reassure our motivated and professional staff, suppliers, and partners, as well as the Victorian tourism and major events community, that we will work tirelessly to deliver these iconic events in 2022.”

The Albert Park Grand Prix Circuit is undergoing its most significant change since the race moved to Melbourne in 1996.

A series of upgrades helped shape the new layout circuit, where seven corners of the track have been modified – two removed entirely, aiming to deliver a brand new on-track spectacle for fans in 2021, promoting wheel-to-wheel racing. A show they will have to wait to watch in 2022.

One of the latest updates on the track evolution, released by the Grand Prix organizers, dates last June 22.

The news regarding the race cancelation was unexpected for many, including local idol McLaren F1 driver Daniel Ricciardo.

“It’s a huge disappointment for all of the drivers that we won’t be coming down to Australia in November, but we understand the reasons,” Ricciardo outlined.

“For me personally, I can’t wait to have the chance to race at home again, and it’ll be even sweeter when we do because it’s been so long. Fingers crossed, things can change for 2022, and we get to see the awesome fans at Albert Park again and put on a good show for them.”

Early in 2021, Formula One revealed a revised calendar for the season, with the Australian Grand Prix moving from March to November, following an agreement between the series and the Australian authorities.

Then, the Bahrain Grand Prix became the new season opener as part of a record 23 races calendar.

Formula 1 CEO, Stefano Domenicali stated: “While it is disappointing we won’t be racing in Australia this season, we are confident we can deliver a 23 race season in 2021, and we have a number of options to take forward to replace the place left vacant by the Australian Grand Prix.

“We will be working through the details of those options in the coming weeks and will provide further updates once those discussions are concluded.”

The modifications include seven corners, the pit lane, and off-track upgrades, aligning the circuit with the changes in specifications of the Formula One cars in 2022.

Overall, the circuit has been shortened by 28 meters bringing the total number of turns down from 16 to 14.

Turn 1: a corner widening of 2.5 meters designed to support more battles following the corner and into both Turns 2 and 3.

It will also boast a simulated speed boost of 17km/h bumping the pace up to a minimum of 183km/h in qualifying.

Turn 6 is where the largest speed changes on the circuit take place.

Perhaps, the most relevant modification comes at Turn 9 and 10 with the removal of the chicane, enabling a new 1.3km high-speed zone while creating the longest straight on the circuit.

Turn 11 (former Turn 13): has had its camber adjusted, resulting in a tighter apex. The straightening and widening of the approach to Turn 11 also increased from 12 to 15 meters.

Turn 13 (former Turn 15) is reprofiled, 3.5 meters wide, to increase the difficulty for the lead car to defend its position.

Meanwhile, the widening of the Pit Lane area by 2 meters – completed in late 2020, opens a window of opportunity to increase the speed limit from 60km/h to 80km/h (subject to FIA approval).

The final phase of the project to improve the racetrack involves resurfacing works, set to take place following the 2021 event in November.

Thus far, there is no information on whether the event cancelation may impact the works schedule.

Australian Grand Prix Corporation CEO, Andrew Westacott remarked: “There are bound to be ongoing challenges with COVID-19, but I want to reassure fans that while there is sadness and disappointment amongst our wonderful AGPC staff there is a tenacity and determination to make sure the next episodes of MotoGP at the island and Formula 1 at the new Albert Park layout are sensational showcases of how we do things in Victoria.”

This article was originally posted on SportsPundit.