15 Of The World’s Most Legendary Recording Studios 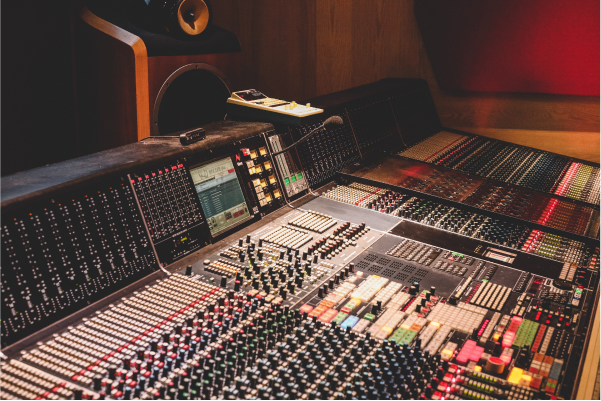 I WAS VISITING LONDON a few weeks ago and on a slow day decided to do the Beatles walking tour (which was inevitably called the “Magical Mystery Tour”). The tour of course ended at the legendary Abbey Road Studios in northwest London, and I got to see no fewer than six tourists nearly get killed stepping directly into oncoming traffic while trying to catch the iconic crosswalk photo.

Modern music fans usually don’t listen to music live, unlike our ancestors, who listened to live music exclusively. As I stood outside Abbey Road Studios and watched a 16-year-old Colombian girl weep at the site where the likes of “Golden Slumbers,” “A Day in the Life,” and “All You Need Is Love” were recorded, I realized that a musical tour of the world — a tour of the songs that moved you to tears, or helped you through a hard time, or amped you up for a big moment — would actually be a tour of the studios, these often nondescript buildings that are typically hidden in plain sight in our cities. Here are some of the world’s greatest studios.

The studio itself doesn’t stand out particularly from the rest of the buildings around it, and it sits in a fairly quiet posh northwestern London suburb. If it weren’t for the tourists crowding the crosswalk and the Beatles-related graffiti covering its outer gate, one might pass and never notice it. The most famous image of Abbey Road is of course the crosswalk right outside the studio. Vehicles in London are legally required to wait at so-called “zebra crossings” as long as you physically stay in motion, so you can take as long as you like taking your picture, as long as you move in slow motion.

The Dungeon is probably better known for the hip-hop collective that was born out of it, the Dungeon Family. The Dungeon itself was a studio in producer Rico Wade’s mother’s basement in Atlanta, Georgia, but the collective has included some of the greatest hip-hop acts of the South and, consequently, of all time.

At the top left is the only picture I’ve been able to find of the Dungeon — pictured in it are the Dungeon Family and production-company founders of Organized Noize, Sleepy Brown, Ray Murray, and Rico Wade (from left to right). Probably the most famous members of the Dungeon Family are Big Boi and Andre 3000 (bottom left). Virtually all of Outkast’s albums were recorded with the Dungeon Family. It’s also the home of Gnarls Barkley, Cee-Lo Green, Bubba Sparxxx, Janelle Monae, and Future (pictured to the right with a Dungeon Family tattoo on his forearms).

Muscle Shoals may be best known for a song that wasn’t recorded at Muscle Shoals: Lynyrd Skynyrd’s “Sweet Home Alabama.” One of the lines is “Now Muscle Shoals has got the Swampers / And they been known to pick a song or two.” Muscle Shoals was formed when a band, the Muscle Shoals Sound Rhythm Section (nicknamed the Swampers) broke away from the great FAME Studios nearby and formed their own. While they’ve got a slightly bigger studio these days, it’s still in the tiny town of Muscle Shoals, way off the beaten path in northwestern Alabama.

Even though the original studio looked like a roadside mechanic’s garage, the Muscle Shoals Sound Studio would go on to record tracks for the likes of the Rolling Stones (“Brown Sugar” and “Wild Horses” from Sticky Fingers in 1971), Paul Simon’s “Kodachrome” (1973), Bob Seger’s Night Moves (1976), the Black Keys’ awesome Brothers (2009, at the new studio), and, of course, Lynyrd Skynyrd’s first album (but not released till much later), Skynyrd’s First (1978).

It’s hard to understate how important London studios were to rock ‘n’ roll in the ’60s and ’70s, and high among those studios was Trident. Tucked back in an alley in London’s posh Soho neighborhood, Trident is barely noticeable from the street, and it takes a little bit of searching to even realize it’s a studio.

On the other side of the world, we have Sunset Sound Recorders, on Sunset Boulevard in Hollywood, California. It was originally built for recording the music to Walt Disney movies, and you can thank them for Mary Poppins, Bambi, and 101 Dalmatians, but they went on to much greater rock heights.

Probably the most famous album recorded here was the Rolling Stones’ Exile on Main Street (1972, and pictured above), generally believed to be their best ever, but it was also the home of the Beach Boys’ best album, Pet Sounds (1966). My personal favorites, however, are Led Zeppelin’s albums Led Zeppelin II (1969) and Led Zeppelin IV (1972), both of which were partially recorded and mixed here. Other famous ones include the Doors’ The Doors (1967) and Strange Days (1967), Jet’s Get Born (2003), the O Brother, Where Art Thou? soundtrack, and, of course, Macy Gray’s On How Life Is (2000).

Headley Grange is a former poorhouse in Headley, England, and it gets on this list for a single reason: its stairwell. During a recording session in the room next door, Jimmy Page was trying out the riff to “When the Levee Breaks,” when the crew started setting up John Bonham’s drum kit in the hall. He went out, start playing, and they recorded it from the stairwell. The result is one of rock’s best ever sounds. Bad Company, Fleetwood Mac, Genesis, and Peter Frampton recorded here as well.

Of course Motown is on here. Technically, the studio itself is called “Hitsville, U.S.A.” (now a museum, pictured at the bottom), but the site was also the home of Motown’s headquarters in Detroit, and as such I’m calling it Motown. It was without a doubt one of the most important recording studios of all time, and if you say the name “Motown” now, it evokes an entire genre of music put out by Berry Gordy’s Motown label.

Among the many great albums recorded at Hitsville are Marvin Gaye’s What’s Going On (1971) and Let’s Get it On (1973), the Jackson 5’s debut Diana Ross Presents the Jackson 5 (1969 — Ross and the Supremes are pictured at the top left with Berry Gordy), the Marvelettes’ Please Mr. Postman (1961), and Stevie Wonder’s debut, The Jazz Soul of Little Stevie (1962).

Electric Lady Studios (as you’ve probably guessed) was founded by Jimi Hendrix after how much it cost him to record his epic album Electric Ladyland. Hendrix was only able to use the studio for four weeks before he died, but the studio, in New York’s Greenwich Village, is still very much in use.

We’ve been focusing a lot on rock, so let’s just get this out of our system: Sun Studio, in Memphis, Tennessee, was originally more of a blues outfit. But blues begat rock, and it begat it right in Sun Studios in the form of Elvis Presley, Jerry Lee Lewis, Roy Orbison, and Johnny Cash, all of whom recorded albums here.

Aside from the founders of rock, Sun Studio also recorded albums for blues greats B.B. King, Howlin’ Wolf, and Junior Parker. It closed for a while but then reopened in 1987, where, probably most notably, it recorded U2’s Rattle and Hum (1988).

It’s called “the Motown of Jamaica,” but really, it should just be called Studio One. Because Studio One is the home of reggae, and it doesn’t need the Motown qualifier.

Founded by Clement “Coxsone” Dodd (the man with the microphone) back in 1963, Studio One recorded albums for Bob Marley and the Wailers, Lee Scratch Perry, Burning Spear, and Toots and the Maytals. You’re welcome, world.

This one could get on here just for the novelty of having what’s basically a truck with a recording studio in it, but it’s actually been the site of a number of insanely good recordings. It was set up by Mick Jagger when he got sick of all the problems of using regular recording studios. They set up a studio in his home and then, so they could move it around, put a control room into this van.

We can thank the mobile studio for songs like Deep Purple’s “Smoke on the Water,” and — because it’s mobile — for the most famous live recording of Bob Marley’s “No Woman, No Cry” — the one appearing on the posthumous Legend (1984). It also recorded parts of a number of Stones and Zeppelin albums, as well as Simple Minds’ 1979 debut album, Life in a Day, and live performances by Patti Smith and the Ramones.

The home of Capitol Records, Capitol Studios gets on this list for the sheer breadth of the artists they’ve recorded here. All major record labels are going to have crazy amounts of awesome musical artists recording in their studios, but Capitol Records is best known for its “echo chambers,” which are part of an underground concrete bunker designed by legendary guitarist and sound engineer Les Paul to get a better reverb sound.

The studios are most famous for being the place where Frank Sinatra did a lot of his recordings — his microphone is still here, and the band Bastille recently recorded on it — as well as being a home to Nat King Cole and the Beach Boys. But it wasn’t just older music: Oasis, Daft Punk, Aaliyah, Outkast, and fun. have all recorded here.

Easily the most fascinating studio on this list is Lee “Scratch” Perry’s Black Ark Studio in Kingston, Jamaica. While not quite as mainstream, and definitely more low-tech than nearby Studio One, the Black Ark was known for Perry’s innovative producing techniques, and also for his incredibly strange behavior. He was known for blowing ganja smoke into the tape decks, burying tapes, and spraying the unprotected tapes with blood, urine, and whiskey to “bless” them. Eventually, after a few rough years of being extorted by gangsters, Perry covered the entire building in magic-marker drawings and then burned it to the ground to get rid of ‘bad spirits.’ Other than producing many of Perry’s own records (and basically inventing the ‘dub’ genre), Black Ark gave us recordings from Bob Marley, Paul McCartney and Wings, the Clash, and Junior Murvin.

You may not have heard of Hans Zimmer, but you’ve definitely listened to him. Zimmer is the German composer known for writing the scores to movies like Gladiator, The Dark Knight, Inception, and The Lion King. I’ve always been a fan of his music — try listening to The Dark Knight when you’re trying to get some work done, it’s second only to Daft Punk’s Alive — but I never knew he had an awesome pad like this. It looks like what I imagined Hogwarts looking like. Yes, those are skull lamps, and those aren’t bookshelves in the back — that’s a synthesizer.

Athens, Georgia, has become synonymous with awesome music, and one of its most prolific studios is Chase Park Transduction. It’s recorded the granddaddy of Athens rock bands, REM, as well as acts like Bright Eyes, Deerhunter, Animal Collective, and Queens of the Stone Age.

This article was originally published on MatadorNetwork.