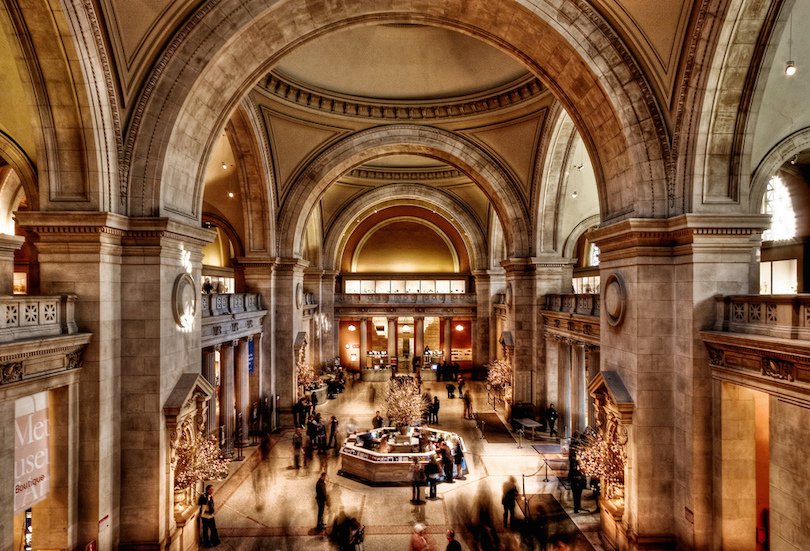 A bustling city full of life, New York’s main attractions have been featured so regularly in blockbuster movies that most visitors will surely recognize and even feel as if they know the Statue of Liberty, Empire State Building, and Times Square before even having visited them. Perhaps less known to visitors to the Big Apple are the city’s wealth of amazing museums, which are definitely worth checking out. In this article, we will present to you the 12 best museums in New York City.

With two of the largest museums in the world – the Metropolitan Museum of Art and the Brooklyn Museum – it goes without saying that there is an incredible range of stupendous art collections for you to enjoy.

In addition to this, the Ellis Island Immigration Museum and Tenement Museum will interest history lovers looking to learn more about how New York and the United States came to be impacted and shaped by immigration over the centuries. A fascinating place with lots to see and do, New York and its many museums offer an enticing mix of art, history, and culture.

A huge city, it goes without saying that life in New York would almost be impossible without its amazing subway system connecting all the different neighborhoods together. Subterranean tunnels crisscross the city and the New York Transit Museum is devoted to telling the story of the subway.

The museum looks at its long history and what it may look like in the future. With artifacts, art, and models on show, the museum is a surprisingly interesting and worthwhile place to visit.

Located in a beautiful Beaux-Arts building, the Brooklyn Museum is the second-largest in the city and houses around 1.5 million artworks. As such, it is definitely worth checking out when in New York; there is an incredible variety of amazing pieces to see and it has one of the best Ancient Egyptian collections in the world.

Spanning over three-thousand years of art history, you can be enjoying African artifacts one minute, wandering around delightful architectural pieces in the garden the next, and later, gazing upon some of the amazing paintings on show.

Acting as both a museum and a scholarly research center, this wonderful institution was opened in 1906 to protect and preserve J.P. Morgan’s private collection. The architecture of the place is stunning, with the library being a particular highlight with its lavish ornamentation and painted ceilings – it houses some amazing old manuscripts.

Also on show are some drawings and prints by renowned names such as Michelangelo, Raphael, and Leonardo da Vinci. Regular temporary exhibitions mean that both locals and tourists can return to the museum time and time again to enjoy all that it has to offer.

With fantastic views out over the Hudson River as well as the Meatpacking District, the Whitney Museum of American Art has much to offer besides its delightful collection of artworks from the US.

Focusing on modern and contemporary American art, its brilliant works are tastefully exhibited around the lovely architecture of the building that features a number of outside patios. With paintings, sculptures, photos, and more, many of the country’s most renowned artists are featured in its extensive collection and the temporary exhibitions are always worth checking out.

Dedicated to the city in which it resides, the Tenement Museum looks at the life and history of working-class immigrants during the 19th and 20th centuries. Fueled by immigration, New York’s evolution into the city we know today is in large part due to the people who came to call it home.

The fantastic exhibits explore some of the stories and identities of its residents. Located in a former tenement apartment where working-class families used to live, actors really bring to life their experiences and how they shaped the city. To make the most of your visit to the museum, you should take a guided tour, which will help you better understand how immigration came to impact and define New York.

Offering an interesting look at the military and maritime history of the United States, the Intrepid Sea, Air, and Space Museum contains some amazing machines and engines for you to explore.

Wandering around the massive USS Intrepid aircraft carrier is a fascinating experience – there are lots of fighter jets for you to check out as well. In addition to this, you can venture down into the depths of a cruise missile submarine. Remarkably, the Space Shuttle Enterprise is also on show.

With exhibits, videos, and displays on the history of these massive machines, the museum is as entertaining as it is educational.

Related: Check out our article about the best art galleries and museums in Amsterdam.

Located in a beautiful building on the Upper East Side, the Frick Collection is a wonderful museum to visit. It houses so many masterpieces and is a world-class research institute to boot. With a wealth of fantastic paintings, sculptures, and decorative pieces on show, wandering around the galleries is a delightful affair.

Works by Constable, Turner, and van Eyck are among its many highlights. A well-put-together ensemble, lavish furniture, and Oriental rugs perfectly complement the old master paintings that adorn the walls, and the brilliant statues on the show are the final elaborate flourish to this lovely collection.

A moving place that is full of history, it is on Ellis Island that immigrants to the United States were processed and their documents were checked to see if everything was in order before they were subjected to a medical evaluation.

The exhibits look at the ancestry and identity of some of the people who made the voyage, the reasons they left their homes, and what the transatlantic voyage would have been like back then. Used as the point of entry between 1892 and 1954, over 12 million people were admitted into the country to begin their new lives, while countless others failed their medicals or did not have the right documents and tragically had to return home.

A poignant place, the Ellis Island Immigration Museum is well worth checking out for its interesting look at how many people came to be American.

Serving as both a memorial and a museum, this touching tribute commemorates the September 11, 2001 attacks that shook the United States to its core. Located at the site where the Twin Towers once stood, the exhibits look at the events that surrounded that day as well as the long-lasting impact that the attacks had on the people of New York.

With interactive installations, memorabilia, and artifacts from the day, as well as shocking footage on show, the museum provides a moving and emotional look at that tragic day. Wandering around the memorial is a sobering but necessary experience if you want to understand the impact 9/11 had on America.

Covering a massive expanse of time, the American Museum of Natural History takes visitors on an incredible journey as it explores the natural wonders of the world. Its evolutionary timeline will astound and awe you as you delve back over 3.5 billion years into the past.

An impressive museum that is jam-packed with dioramas, interactive installations, and interesting exhibits, it is a great day out for the whole family. The dinosaur section always proves to be a popular part of any visit.

Whether it’s venturing into jungles, ascending mountains, or traveling to the bottom of the ocean, you will certainly come away having learned so much about our amazing planet. On top of all this, there is a fantastic planetarium where you can explore the far reaches of outer space.

Dedicated to contemporary art, the Museum of Modern Art (MoMA) is one of New York’s most popular museums, and with good reason. With a huge collection of paintings, sculptures, and designs on offer, visitors can enjoy perusing the 150,000 artworks on show.

There are numerous masterpieces in the galleries which guests will enjoy, such as the beautiful ‘Starry Night’ by Van Gogh and the trippy ‘The Persistence of Memory’ by Dali. Whether it is pop art that you are interested in or film, photos, and futuristic pieces, the museum will certainly have something that you enjoy; many of the artworks on display are astounding for their inventiveness and creativity, which definitely makes it one of the best museums in New York City.

As the largest art museum in the world, it is fair to say that the Metropolitan Museum of Art is a must-see when in New York. With over two million artworks housed within its confines, its enormous catalog of paintings, sculptures, and artifacts really do beggar belief.

Wandering its never-ending galleries is a breathtaking experience, as priceless paintings and artworks look down upon you from every angle; the sheer variety of pieces on display means that there is something for everyone to enjoy. Countless masterpieces are exhibited and among the many highlights of the show are The Temple of Dendur, which dates all the way back to 15BC, and ‘Autumn Rhythm (Number 30)’ by Pollock.

With ancient Egyptian, Greek, and Roman artworks and artifacts on show, the Metropolitan Museum of Art needs to be seen to be believed, such as the extent of the beautiful artwork on display. Located in Central Park, the museum’s sumptuous architecture and delightful exhibition halls are just the cherries on top of a wonderful experience.

This article was originally published on touropia.com