11 Things to Consider Before Adopting a Pet Green Iguana 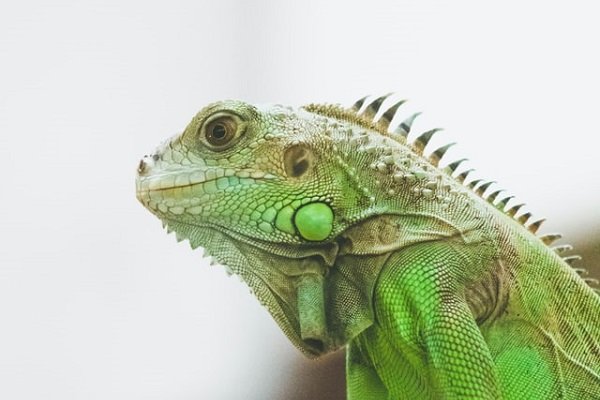 Thinking about adopting your very own pet green iguana? That’s awesome—if you’re ready for it, and you have all of the appropriate resources needed to prepare for a life of reptilian parenthood.

Unfortunately, green iguanas are often misrepresented in popular pet stores, and many potential domestic iguana keepers have no idea what they’re getting into. As the old saying goes, with great iguana comes great responsibility, and it’s important to fully understand the requirements and implications regarding their ownership.

To get you started on this wonderful cognitive journey, here are eleven things to consider before bringing an iguana home.

11 Things to Know Before Getting a Pet Iguana

1. They Get Really Big

Green iguanas are tiny and cute in pet store displays, usually barely the size of an iPhone, but they don’t stay that way forever. Next thing you know, they’re sizing up to Galaxy S5 lengths, then they’ll be rivaling a Galaxy Note, and before you know it, you can start measuring it with an iPad! And they get bigger still! We’re running out of lame technology metaphors, so let’s just cut to the chase: in captivity, a healthy green iguana can reach over 6 feet in length and can weigh up to 20 lbs . . . those are alligator standards, friend.

Think about that before you even consider housing a green iguana, and know this: they grow fast. That adorable little green guy won’t be gecko-sized for long, and by the time he’s a full-blown adult, you’ll have your very own Godzilla. Which sounds cool until you realize that Godzilla is best known for destroying Tokyo—not very cool, after all, huh?

2. They Need a Lot of Space

Okay, they get big, so what? Maybe you have plenty of space in your house, or maybe you can adapt apartment life to living with an iguana. Hate to break it to you, but adult green iguanas take up more space than you probably imagined, and they absolutely must have their own dedicated territory to roam freely.

Oh yeah, green iguanas are also arboreal, so they’ll need height in order to satisfy a natural urge to climb. Pet store terrariums work fine for infants, but they’ll grow out of them within a year. That means you’re going to have to prepare a safe enclosure for your adult green iguana sooner rather than later.

Bare minimum requirements: the enclosure has to be at least 6 feet in length, 6 feet in width, and should be at least 6 feet in height. An entire small room is even better, as long as it has been modified appropriately. Other ideas: a dedicated sun room will probably work great, and in some strange cases a redesigned, heavily modified bathroom may even be an option.

Green iguanas you find in pet stores are usually imported from South America and are native to regions that are rich in heat and humidity. Long story short: green iguanas in captivity have to live in similar environments, and their enclosure needs to emulate a natural habitat.

This means you will have to make sure that their environment needs to consistently be heated between 80 and 90 degrees during the daytime, and around 75 degrees at night—year round. They retain most of their hydration through skin, so controlled humidity is also a big must. Another biggie: they require an additional basking heated lamp and a special UVB light source in order to prevent calcium deficiency.

4. They Are Terrifyingly Strong

It’s not the most pleasant thought, but if threatened, green iguanas can do some serious damage with their de facto defense system: their tails. They appear to simply dangle around and move only as an afterthought, but don’t let looks deceive you: getting whacked by an iguana tail isn’t fun for anyone, and you’re bound to get a good whipping during the required taming months.

In extreme cases, an adult iguana tail is strong enough to break human bone. Devastating and fatal consequences ensue when you throw a human child or other small pet into the mix. Granted, you’ll really have to do something terrible to your beloved green friend in order to feel the true wrath of an iguana tail scorn, but it’s not something to take lightly—iguanas are not domesticated house pets like cats and dogs, and therefore will always have an inherent wild streak to them, and that includes what they do with their tails. They also have sharp teeth, and iguana bites do indeed suck, but a flesh wound is nothing compared to what they are truly capable of.

5. They Can Live a Long Time

The standard lifespan of a well-cared-for green iguana in captivity usually ranges from 12 to 15 years, but green iguanas are known to live upwards of 20 years in some cases. Either way, as an iguana owner, you will be responsible for your favorite lizard for a good chunk of time—these things aren’t hamsters, people.

Also important: you will have to have the financial means to care for your iguana throughout its long lifespan, which includes making sure it access to a proper diet, and that bulbs for various required lamps are effectively replaced every six months. Heated bulbs aren’t cheap either—and the overall price will add up to a hefty sum over time.

Though their pudgy little bodies may scream a variation of “cuddle me, human,” iguanas are not cats, and most aren’t going to be keen on cutesy snuggling. This doesn’t mean that contact is forbidden; on the contrary, household iguanas need to be picked up and held daily for ritualistic taming purposes. Properly holding an iguana is an art form in itself, though, and it’s going to take a while before it submits to such unnatural contact.

Some iguanas may even be fond of climbing their human captors, though their sharp claws aren’t the greatest thing to have digging against skin. Always keep this in mind, though–unless you have the coolest green buddy on the block, most iguanas are going to try to get away from you, and if you aren’t listening to its reptilian wisdom you are probably going to have to pay the price (see point number 4 for additional clarification).

Baby iguanas are quick little buggers and they can be extremely entertaining to watch, but just like your favorite 1970s action hero, they become docile over time and transform into extremely lazy creatures. Adult iguanas will spend a good majority of their time either basking in the sunlight or sleeping on a tree branch-like object. They won’t play games with you, they won’t dance for you.

They probably won’t want to go for walks either, so that fancy iguana harness you were suckered into buying was pretty much a waste of money (good luck getting your iguana to wear it, by the way). Yes, it’s true: at the end of the day, iguanas in captivity will ultimately resort to a life of just “being there,” and since that’s how they act in the wild, it’s not a behaviour you’re going to be able to change. There’s nothing wrong with that, mind you, but set your expectations to iguana reality: they’re boring.

8. Their Tails Can Fall Off

You should be effectively scared of iguana tails by now, but there’s no harm in admiring them, is there? They are rather glorious, after all, and would probably strike the envy of their smaller brethren if such emotion were a possibility in the reptilian classification.

They’re powerful things, these iguana tails are, so it may be shocking to learn that, just like gecko tails, they can fall off in cases of extreme stress and/or threat. It seems a little gruesome, but it’s absolutely for the best since it could mean life or death if your iguana is ever in confrontation with a larger, scarier animal. Rest assured, they do indeed grow back, but they’re never quite as wonderful the second time around.

Green iguanas are natural herbivores, requiring a daily diet of fresh leafy greens and fruit. Great examples include everything your mother told you to eat: kale, collard greens, mustard greens, turnip greens, green beans, and asparagus, among other salad bases. Iguanas also enjoy fruits, especially bananas, but a majority of their diet should consist of vegetables.

They aren’t the brightest lizards on the block, though, and in some cases may eat meat products in an accidental capacity, and you should never let this happen. Their bodies aren’t designed to digest anything out of an herbivorous diet, and kidney failure is a sure bet if your iguana acquires a taste for dried cat food. This can be really bad news since kidney failure is a leading cause of iguana-related death in everyday households. If you love your iguana, you’ll feed it a delicious salad daily, and you’ll keep it away from accidentally eating any type of meat.

One more thing to note: iceberg lettuce does not cut it, since it has absolutely no nutritional value, and iguanas need plenty of calcium and phosphorus to keep their bones healthy.

10. You Have to Do a Lot of Research First

Iguana care isn’t something we typically learn growing up, and since they are a rather unusual pet to have, common knowledge within the topic is in short supply. You are going to have to perform plenty of research before adopting an iguana, and this article can only be the tip of the iceberg. Before you throw your arms in the air and get a turtle instead, keep in mind that there’s some good news on the horizon: information written by passionate, educated iguana experts is readily available, and lots of it can be obtained for free.

It’s not a bad idea to have a physical book on hand—Iguanas For Dummies by Melissa Kaplan is an awesome, easy to read, extremely informative all-in-one iguana guide, and it covers just about everything you would ever need to know about this topic.

No matter how much you want them to be, green iguanas are not, and never will be dinosaurs. Dinosaurs have been extinct for roughly 65 million years, and your green iguana will always be a common lizard, nothing more and nothing less. Besides, if having a pet dinosaur is what you’re after, then you may want to consider getting a bird instead since they’re probably more related to a tyrannosaurus than an iguana would be.

We’ll leave here on a more serious note: please do not adopt an iguana on a whim, and never, never get suckered into an impulse buy at your local pet store. Iguanas are amazing animals, but the act of taking them into your home inhibits a great many of their naturalistic habits, therefore rendering you as their sole provider and only true means of survival. Unless you are well read on the topic, have all the resources needed to care for an iguana readily available, and are dedicated to provide for your iguana with the utmost care, consider a cat instead.

This article was originally published on Pet Helpful.